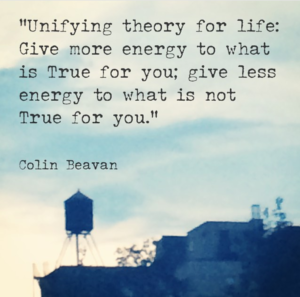 Here is the unifying theory for living a good life and helping the world that summarizes everything I wrote in my book How To Be Alive:

So simple, right? Also, so gentle. Also, sometimes, so hard. In fact, all the scriptures, all the sutras, all the vedas are written just to help us do this one thing: give more energy to what is True; give less energy to what is not True. But we don’t need to read all that writing—though of course it can be helpful—because the path can clearly be found within our Selves.

Listen: In 1906, while leading the movement for the rights of ethnic Indians in South Africa, Mahatma Gandhi coined a Sanskrit term for the spiritual force that he believed lay at the root of that movement and, later, of India’s independence movement. That term is satyagraha. It comes from the words satya, meaning “truth,” and agraha, meaning “insistence” or “holding firmly to.”

So satyagraha is what Gandhi called the “soul-force” or the “love-force” that moves toward Truth. Each of us has that soul- force or love-force within us, and the person who follows it—who practices satyagraha—is called a satyagrahi. By clinging to Truth, a satyagrahi automatically moves toward his or her vision for a better life and a better world.

“I discovered in the earliest stages,” wrote Gandhi, “that pursuit of truth did not admit of violence being inflicted on one’s opponent but that he must be weaned from error by patience and sympathy.” Therefore, the pursuit of Truth comes not by trying to change others or the world but by changing the way one reacts to others and the world—by changing oneself.

So, in this moment, what is really True for you? How can you follow it? What is your next step? What can you do right now that is True?